For everything God created is good, and nothing is to be rejected if it is received with thanksgiving ... 1 Tim. 4:4

A friend of mine hated  rock music. In his youth, the lyrics led him to drug use and immorality. As a Christian, God convicted him. This form of music drove him to sin, and he could not listen to it any longer. Being a godly man, he obeyed. 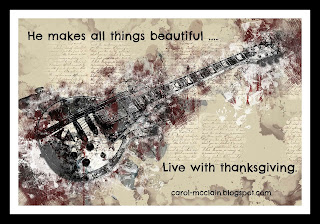 We belonged to a church that believed 1 Cor. 8:9--that our liberty could never be a stumbling block to the weak. Ergo, if my friend could not listen to rock music, none of us could. Furthermore, none of us should ever disagree with him.

This became a problem for me. If he didn't like music, I couldn't. enjoy it or admit I did.

Things snowballed. Another person thought dancing a sin. Therefore, no one danced. However, dancing before the Lord was mandated. If you didn't, you were sinful...

On and on it went.

These good-intentioned self-denials were another form of legalism. The only thing God asked of me was to not blare my Mariah Carey or Whitney Houston music in his presence. I could talk about it, admit going to the concerts, etc.

I come from a long line of alcoholics. God convicted me early about drinking, and I don't. It doesn't mean my Christian friends can't drink. The Bible forbids drunkenness, but not the consumption of wine or beer or a Cosmo. I have no right to demand everyone adhere to my conviction.

But long ago, I learned sin is sin for only two reasons:


If a particular addiction hurts you or others--we must abstain.

Are there things you abstain from because of personal reasons?