The Fenian Uprising in Malone: Part 1 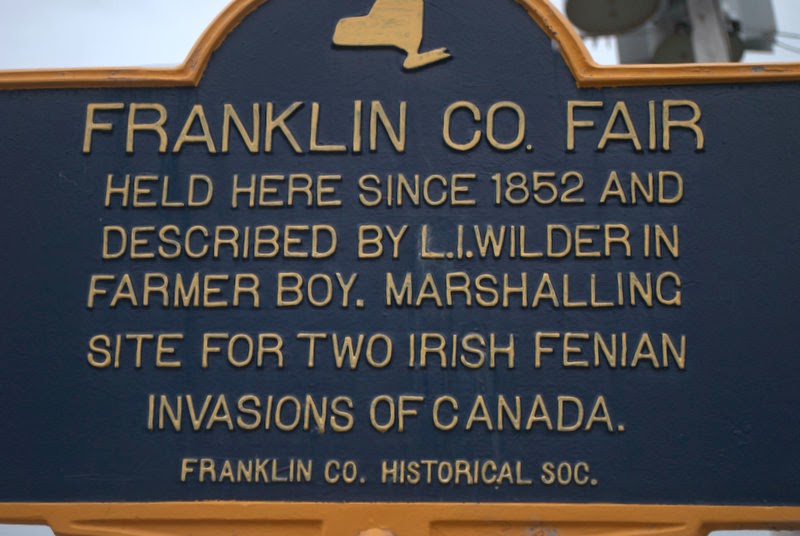 The Fenians. Just who were they? And why were they here in Malone, NY? Glad you asked.

The Fenians lived in Ireland and their movement existed primarily in England and The United States. Simply put, they wanted Ireland completely independent from England. They believed the Great Famine that hit Ireland and the poor aid from England was essentially genocide.

Several leaders came to the United States during the mid-nineteenth century. By 1866, about 3,000 Fenians gathered at our fairgrounds to invade Canada.

Why in America? They believed, according to Seaver, that because England gave help to the South, our sensibilities would be wounded and we would be eager to help them overthrow British rule in Canada (669). In fact, many were--not just from Britain's help in the Civil War, but the War of 1812, and family remembrances of the War of Independence, as well as border disputes with Canada.

Our area contributed funds in the form of bonds that would be paid off when Ireland became independent (669).

On the June 2, 1866, warnings came to Huntingdon from Chateaugay that on Friday evening, trains  loaded with Fenians were headed to Malone. Unfortunately, the British troops had no arms at the moment, and had the Fenians advanced at that time, things may have turned out differently.

But what part did Malone play?


In 1870, the Fenians tried to invade Canada once more and General Meade again intervened and cut off their reinforcements.

The Underground Railroad flourished between 1840-1860, and it did reach Franklin County and Malone--although not to the degree of some other routes. New York's primary routes were in the east, up to Rouses Point or across central New York to Syracuse. From there, slaves traveled to Oswego or Buffalo. Aside from New York City, many started their New York path to freedom via Elmira.

Most fled to Canada; however, a Negro colony was established in North Elba and Franklin by Gerrit Smith.

A less known route passed through Malone, NY. However, it is not known from where the escaping slaves came or to where they fled (644). Scholars have not defined Malone's route--we must therefore assume it was rarely used. We know, from Seaver's account and from the tunnels in Malone's First Congregational Church, it did exist in this village.

According to Seaver, "A former Malone resident whose memory extended back to 1845 state...many of the negroes (sic) to whom Gerrit Smith deeded homes in the town of Franklin reached their properties via Malone, having come here by way of Plattsburgh or Ogdensburg (644).

Two former slaves made their homes in Malone. Two of which were Henry Jones and his first wife, both members of St. Mark's Episcopal Church. She refused to live in the wilderness. She insisted her grant gave her the old Miller House, where the Flanagan now stands, and ordered him out of the house (644).