Little changed in Malone until the Civil War. At this time, the people became a little less puritanical and a little less amenable to censor from the clergy. Yet their amusements were puritanical by today's standards: debating societies, bell ringers, concerts, bowling, dances, circuses and minstrel shows. 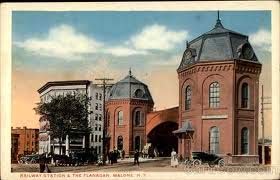 Once the war arrived, changes came that no one had anticipated. Prices skyrocketed, and many people had to pinch their pennies. Yet, others seized upon the times and prospered. During this period, many grand houses were built, and all but the poorest dressed better.

As in the rest of the United States, many men were called to arms, but their was little price fixing or rationing. However, hundreds of soldiers were quartered here for weeks or for months--our main, inescapable reminder of the war.

In 1864 and 1865, people feared Confederate attack from Canada as had been seen in St. Albans, Vermont. War meetings abounded and bounties encouraged enlistment. Malone was the headquarters for the draft for both Franklin and St. Lawrence Counties. S.C.F. Thorndike presided as provost marshal (56).

In 1863, seventy-five men were drafted. Some paid fees of $300 to get out of the draft, others left for war and some fled to Canada. Although the Civil War was the costliest war in American history in regards to human life, not much of it disrupted northern New York--certainly not as much as the two world wars had.

Next week, the Fenian uprising.