The Dutch Schultz and Malone: Part 1 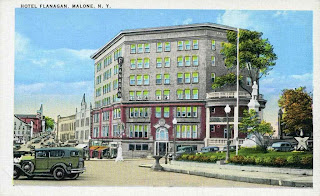 Prohibition ended in 1933, but Malone's last hurrah with it came in the summer of 1935 when the gangster Dutch Schultz came to town.

Schultz, whose real name was Arthur Flegenheimer, made his fortune bootlegging. He dodged $92,000 in taxes on $481,000 income. He said he was told he didn’t have to pay taxes on it because it was illegal income.

Judge Bryant, a native of Malone, decided to take him to his home town because he believed Schultz could be convicted. Unfortunately, the jurors disagreed. According to Jean Child, daughter of one of the jurors, Hollis Child, "(t)he majority, seven jurors, felt that Judge Bryant brought the trial up here so he'd have a bunch of dumb farmers, and get what he wanted." (Adirondack Life,  August 1991, p. 30).

In July, members of Schultz's mob began migrating to Malone. They took up residence in the Flanagan Hotel--a suite of rooms on the fourth floor for Schultz, the first floor for the defense team which included local lawyer, Bud Main. Immediately the gangsters began to buy the town.

Schultz arrived on July 17, 1935 with his chauffeur and body-guard, Lulu Rosencrantz.

He played up his role as a wonderful, misunderstood man by making sure:


And the town loved him, seeing him solely as a man on trial for tax evasion. Even though he was known as a bootlegger, most people, especially near the end of Prohibition, had made and/or sold their own liquor, so they saw Schultz as just a regular guy.

He dressed well. Was mild-mannered. And if he was so bad, why was he only being tried on tax evasion--especially as he had tried to pay the back taxes?

Answers to last weeks quiz: Who were the two gangsters in the North Country? Obviously, Dutch Schultz in Malone. The other was in Saranac Lake--Legs Diamond.

Next quiz: Which local person made national headlines speaking against Schultz and Malone's buyout?